Gigas Magna Storyline Wiki, or GMSW for short, is a fanon encyclopedia for the BIONICLE fan fiction series on Custom BIONICLE Wiki. Help us to construct our 284 articles and expand this saga to the infinite worlds beyond!

"Supply the coordinates or I will find you myself and relieve you of the troublesome burden you call a head. Now get on with it."
―Nightwatcher to Shadrus [src] 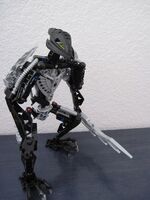 Not only is this one of the wiki's longest character articles, but this is a seriously cool character. I should know. I made him up.

So, not only is he a treacherous, deceiving, cunning, manipulating, perfectly honest, witty guy, but he's also a bounty hunter. And we all know how awesome bounty hunters are. You can just about sum him up in this paragraph from the original version of The Darkness Returns:

"If all the bounty hunters failed, then Nightwatcher would be sent out. However, since Nightwatcher's method took a long time and usually involved a large and complicated plan to bring down one or more interplanetary organizations, the Guild leaders found it best to keep Nightwatcher as far away as possible from the rest of the Guild. He was never paired with anyone else, as the last time that had happened, the other bounty hunter had ended up permanently fused to the bounty."

Retrieved from "https://gigasmagna.fandom.com/wiki/Gigas_Magna_Storyline_Wiki?oldid=5534"
Community content is available under CC-BY-SA unless otherwise noted.